I had such good intentions to actually write, I SWEAR.

Once I got back from Rolex, my life immediately went bananas. House sitting, ponies to ride, concerts, adventures, hiking, friends…

What IS this madness?

Seriously guys. I don’t know what happened. I am a level ten introvert with a personal bubble the size of Texas. I am consistently overwhelmed by socializing and the human race, so it’s been both amazing and a little disconcerting to be this insanely busy! I am going to narrow it down to the cliff notes version, with pictures, and pray that I have the time/energy/sanity/brainpower to keep on top of it from here on out!

Once the good weather really hit, I began feeling that familiar pang to be in the saddle again. This was both AWESOME because I was dead scared I had completely burnt myself out on horses and sad because…well, no pony!

However, amazing friends to the rescue! I have been riding at least once a week, sometimes twice, sometimes way more, all summer! Thanks to my weight loss (70 lbs and counting, bitches!), a lot more horses have become available for me to safely ride.

First of all, here is Acerca de Tiempo de Pluma, who is fondly called Gigi, Steak (I still don’t know how she got that nickname), and Blondie. 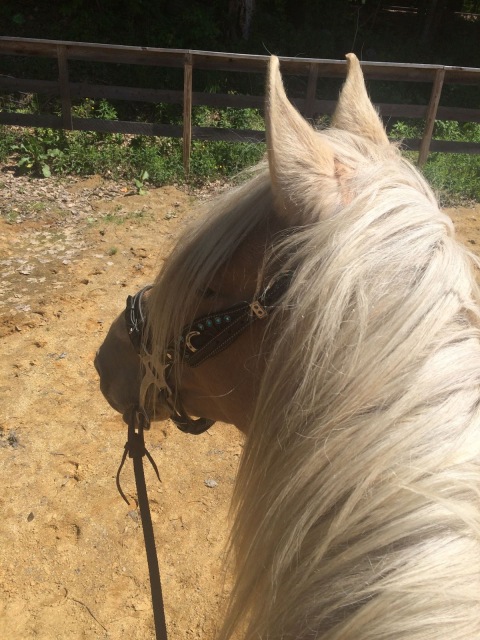 Acerca is the main reason I’m so excited to be back into the horse world again. She is a lovely, sweet, willing Paso Fino mare who was reminded me WHY I love ponies. She’s point and shoot for the most part, but is just so spunky and happy about life in general that she makes me laugh. She has a really fabulous gait that just eats up the ground and REALLY knows how to kick it up to mach ten when I ask her to. She is so, so soft in her aids and I feel a bit like I’ve come home every time I climb into the saddle and I’ve never felt more relaxed on a horse. I’d have to pry her out of my coworker J’s cold, dead hands but she is officially the basis of what I want in my next horse!

I have also spent time riding this pretty lady. Her name is Gema and she’s also a Paso Fino.

She is, quite possibly, the weirdest horse I’ve ever ridden. She has a largo that none of J’s other horse’s can match, and there is literally nothing that bothers her. She is a little less sensitive to aids, so she’s a perfect match for beginner riders…and for when you REALLY don’t want to worry on horseback! I do have a strong preference for Acerca but occasionally switch it up with Gema when I’m able!

Then, there’s Gracie…who is not graceful at all, sadly!

This adorable chunk of a Tennesee Walking Horse mare has the smoooooothest rack on the face of the planet. It is literally like riding on air. I love videoing from this horse because I literally do. not. move. She is a little bit more of a challenge, because she’s definitely a worrier and has a good sideways shy to her if you’re not on your game, but she is just a sweet girl who loves to go out and play! She’s a little hard on my hips and knees because she’s as wide as a truck, but I suck it up and deal because not only does it mean I get to ride her, it means I get to ride with one of my favorite coworkers, N. N is the sassiest but kindest lady on the planet. She is in her 70s, and most of us in the office have decided that we want to be N when we grow up…still kicking ass and taking names, and riding all the time to boot! 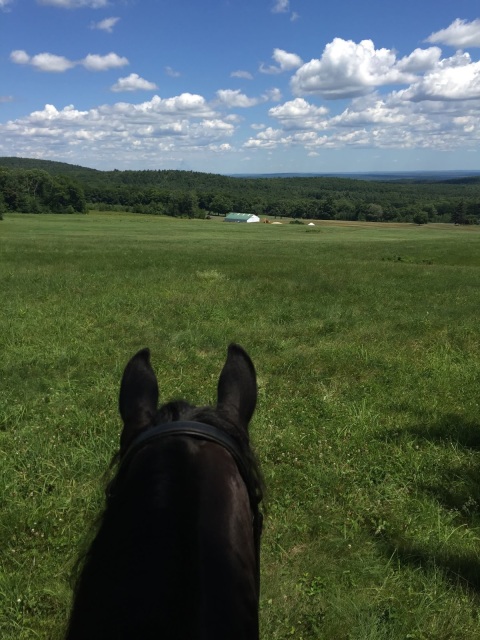 Lastly, and most recently, is Chism, aka CheezIt, who is a (surprise, surprise!) big red Quarter Horse.

My back gets pretty cranky, pretty quick when I ride the trotters these days but Cheez has a really lovely trot, and all this regular riding has really helped me get my seat back, so I’m not struggling as much as I would have otherwise. I’ve just started riding Cheez, and he’s just a funny old man who is a no-worries ride and reminds me so much of GP. Cheez is owned by (surprise, again!) more coworkers — K, who sits directly next to me at work (tolerant soul!) owns the big beast and her daughter, L, who worked with us for a stint, rides out on her big Thoroughbred gelding, Holden. We have much exploring to do together, and hopefully some beach rides/hunter paces in our future!

So! Those are all my ponies! I could go back and recount each ride thanks to a short chronicle/photo post on Facebook each time I climb up on a horse, but that’d take forever and I am actually lazy af. So, short synopsis it is. I am so eternally grateful for all the fabulous people who have offered me their horses to ride this year. I love that I’ve gotten to ride so many incredible horses on a regular basis and that people seem to think I’m neat enough to let me come back and ride more than once!!

If you didn’t know, I love music. I’m not a musician, I can’t sing (REALLY can’t sing), but I love talented, passionate musicians who have voices that don’t need to be touched by autotune or anything artificial. I didn’t spend enough time galavanting around to concerts last summer, and vowed to make up for it this summer. So far, I have seen:

Mary came to Boston Pride this year (which is always a hoot, no matter what). It was a free concert, and though I had to be across the other side of the city for Lindsey Stirling the same day, this was totally worth it. Kelsey of Blonde Bomber Acres fame came down and we watched some of the parade before hoofing it over to city hall and watching the concert. I snagged meet and greet tickets for us and while it was mildly lackluster due to Mary getting stuck in traffic, it was cool to meet her. Also, hey, that dress looks a bit familiar…

I’ll be the first to tell you I do not like classical music. Or electronic dance music. I usually want/need lyrics to get into a song…but I LOVE Lindsey Stirling. Love. I don’t know if it’s because she has a super awesome pop vibe or if it’s because she’s a video game nerd, but I adore her. Hannah from The Longest Format came with me to this one, and we thoroughly enjoyed her concert together. Her sets and backup dancers had more “flash” than I’m used to, so it was just fun all around!

This was a cool one for me and K, my friend who obsesses over Castle and Stana Katic with me. We splurged for the meet and greet because K loves Ingrid the way I love Sara Bareilles. She was a mild nervous wreck while we waited (for forever it seemed like), and then got ushered in to meet her. Ingrid is a tiny little human and I’d like to put her in my pocket and take her home. We all got pictures with her, and then got to go backstage and poke around a bit. Seeing the venue from the “other side” was really neat and hanging out with Ingrid was a blast! She is super sweet, and amazing live.

This concert was mostly unplanned and kind of last minute. I missed Pentatonix coming around the first time on their solo tour, so when Kelly Clarkson (who I liked before but now LOVE) announced PTX was touring with her, I jumped. I surprised my coworker and friend H, who leaves for ENGLAND (!) to go to grad school shortly, and took her with me. I also jumped on meet and greets because why the hell not? AND IT WAS WORTH IT. I love, love, LOVE PTX and if you haven’t heard of them, please take a minute and watch that video. They’re an acapella group and they totally SLAY. The tall blond guy and the shorter black haired dude, Scott and Mitch, also have a YouTube show called Superfruit (yes, they’re both very gay…hence the name) that is both hysterical and amazing. It was SO COOL to meet them. They are all superduper nice! They rocked the house and so did Kelly Clarkson, who is ADORABLE and performs barefoot and made me sob like a baby through one of her songs (and she NOTICED because we were front row and it was MORTIFYING…but the wink and the wave was nice of her).

Upcoming this/next month I have: a musical that was written by Sara Bareilles (which should be FABULOUS, knowing Sara’s love of cuss words and incredible songwriting talent), Matt Nathanson, Taylor Davis, and the crowning glory…front fucking row at Ed Sheeran at Gillette Stadium. If all goes to plan, I’ll have stalked, met, and properly seduced the awkward British ginger hobbit and he’ll have proposed to me by the end of next month. SHH DON’T RUIN MY STORY WITH YOUR LOGIC.

TIME FOR A NEW HORSE?

I will admit: I have been casually looking. I know, I know — I SWORE I wouldn’t even think about it until at least a year after Simba, but all of this riding has reminded me WHY I like these obnoxious critters. If nothing falls into my lap by the end of this month, everything goes back on hold until spring. I’m not getting another horse at the beginning of winter again. That was dumb and I don’t like making dumb mistakes more than once (okay so I did that one twice but NO ONE ASKED YOU PEANUT GALLERY JEEZ).

My sister is getting married! I’m one of the maids of honor! This is terrifying! Exclamations!!!

I briefly mentioned it, but I’m down 70 lbs. I would like to make it an even 100 by the time the new year rolls around, but we’ll see. I’m hiking 4-5 days a week and riding on top of that. I have a metric fuckton more energy and it’s been a rewarding journey. I have a lot to go, and am still struggling with some obnoxious medical issues, but a lot has improved with just the amount that I’ve lost so far.

I stalked my manager at her horse show and got some shots for the catalog…so, no big deal, I’m going to be a credited photographer in next year’s Dover Saddlery catalog:

I also learned how to shoot a gun, stalked Taylor Swift’s tour truck on the highway (one of many, I’m sure), took some pretty pictures for a coworker, and have basically not stopped house sitting since June. All in all, I am exhausted and running around like a chicken with my head cut off, but it’s all for good reasons!

I think that’s everything major that has gone on in my life since fracking APRIL. I’m hopeful that I’ll keep on top of things now! I hope you are all well, especially those of you we don’t hear from often in the blog world. Now, to finish doing other productive things, or throw on yet another episode of Sense8 on Netflix…?